Bar Coluzzi was opened by Luigi Coluzzi - a former boxer - and his wife, Eleni, on WIlliam Street in 1957, before being moved to 322 Victoria Street Darlinghurst in 1970. Inside the café, the walls are full with boxing memorabilia. The café has been home to a regular group of followers from all walks of life, and at nearly all times of the day the little red stools at the front of the café on the street are full. Early mornings, the café is home to a team of lycra clad cyclists who have an espresso start to their morning ride. The café has a colourful history.
Luigi Coluzzi is considered to be the first person to introduce Sydney to good espresso coffee.
Coluzzi first arrived in Australia in 1954 with two key skills - as a boxer and as a barista - and he's made a living from both of them. Those hands - great, meaty fists that look like they belong to a man bigger than 5ft 8in - are the hands of the former middleweight champion of both Italy and Australia who boasted a mean left hook. They are also the hands of an espresso machine, trained on the job in Rome from the age of 12.

It was on his second visit to Sydney in 1955 that Luigi met a young Romanian girl called Eleni who would become his wife and mother to his three children.
From Gough Whitlam to Clover Moore, the Fonz (Henry Winkler) to Russell Crowe, Cadel Evans to Tony and Anthony Mundine. "Bar Coluzzi is a meeting place," Luigi says. "People come here their whole lives. Everything [else] changes but Coluzzi stays the same." 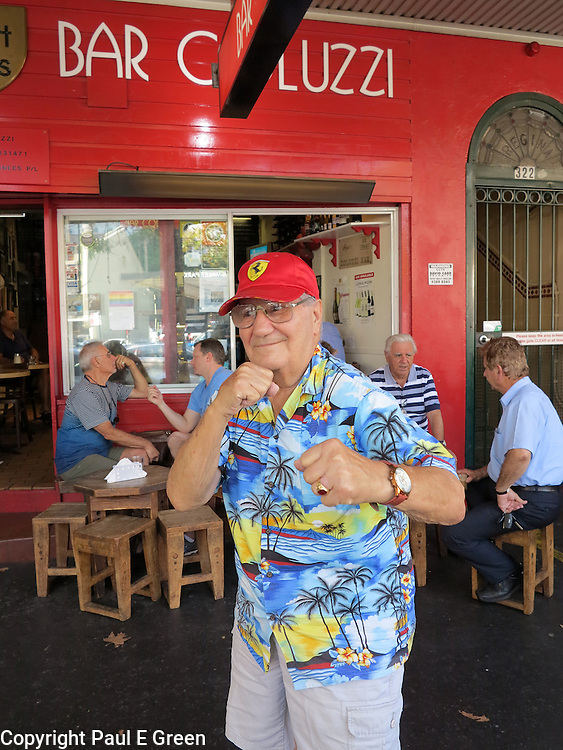